Find Your Community
Change Your Radius

Your Town. Your Life. Full Circle.

Swearing in of Montgomery Township Committee for 2018

Mark Conforti was sworn in as the new mayor of Montgomery Township at the reorganization meeting held at the municipal building on Monday, January 8. 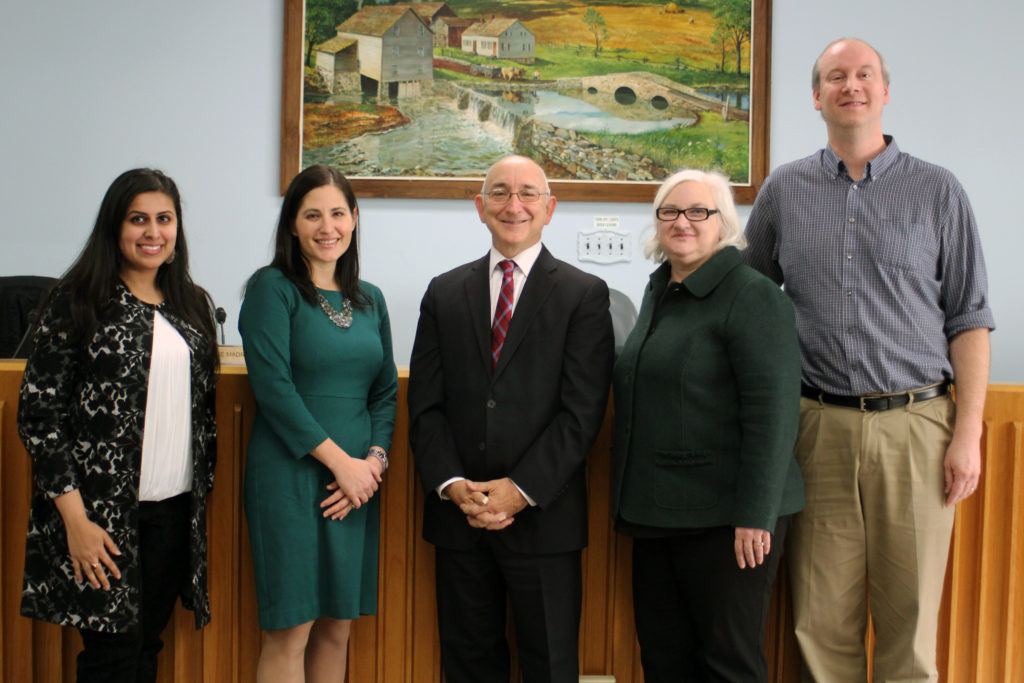 The Montgomery Township Committee renewed their commitment to continued fiscal responsibility and high quality public service at their reorganization meeting January 8th. Mark Conforti was selected to serve as mayor this year and Christine Madrid was chosen as deputy mayor. A new member, Sadaf Jaffer, was sworn in to 3-year term on the governing body.

The Montgomery mayor and deputy mayor are chosen to hold these positions each year from among the elected Committee by the vote of all five members. Mayor Mark Conforti has served on the Committee since 2011; this is his first term as mayor.  Deputy Mayor Christine Madrid begins her seventh year on Committee. Each Committeeperson is elected in staggered fashion to serve for 3 years.

Mayor Conforti expressed his optimism for the future of Montgomery which he called an attractive 'magnet community' with one of the best police departments in the U.S., one of the highest performing school districts in New Jersey, and close to 40% of its open spaces set in preservation for current and future generations.
"Some towns can claim one or two of those things, but I can't think of any who can claim all three!  So as long as we keep doing our job and administering the town effectively this will continue to be a magnet community for years to come," Mayor Conforti said.

Mayor Conforti is beginning his fourth full year as a member of the Montgomery Township Committee, having served in 2012 and 2016 through present. He has also served on the Planning Board since 2010 and was a member of the Board of Education from 2006 to 2009.  The Mayor is retired from a position as Managing Director at Credit Suisse.

Deputy Mayor Christine Madrid congratulated Ed Trzaska on a successful year as Mayor and welcomed Mark Conforti to the position, saying how glad she was that he was spending his retirement years working for Montgomery. Reflecting back on 2017, Ms. Madrid said, "I am proud that we kept spending low, continued to protect public health and safety, and invested in our infrastructure in many areas of town."  She specified the many road and park improvement projects which have been completed of late. Looking ahead, she referenced changes to the federal tax code, and said it was not only important to work to keep taxes low, but to also to explore all avenues that might help to mitigate that impact on residents.

Deputy Mayor Madrid was first elected in 2012 and served as mayor in 2015. She is in the third year of her current term on the Committee.  Ms. Madrid is an attorney and works as a Departmental Director at the New Jersey Department of Labor and Workforce Development. She and her husband are raising their two small children in Montgomery.

Committee member Ed Trzaska, who just completed his third term as mayor, reflected on the accomplishments of the last several years, as well as upcoming goals, including finishing the parks initiative and preserving more open space.

"We have accomplished a lot for Montgomery, including holding the line on budget spending, reducing township debt, making local government more open and transparent than ever, saving residents millions in electricity costs, moving forward with significant investments in our roads and police department, and preserving more than 700 acres of additional open space," he stated.

Among stated goals, Mr. Trzaska cited the condition of the municipal building in Montgomery and the proposed project at Convatec.

"After four years of analysis and review, we decided to move forward with a new building on the former Convatec property.  This was a big decision, but we could not spend the required $15 million to upgrade the current building, especially since even at that price tag, the final product would not fully meet our future needs. We are working with Somerset County on the process and will know our construction options in the next several months.  There are many benefits with the new location and building.  Our police department's facility will now conform to all state and federal guidelines and be located much closer to our schools.  The new building will also include enough space for a brand-new library, which will be run by the county library system."

Committee member Patricia Graham enters the second year of her three year term in 2018.  She has served on the Township Committee since 2010 and as deputy mayor in 2012, 2013, and 2016. She congratulated the new mayor and deputy mayor, thanked Ed Trzaska for his time serving as mayor, and welcomed Committeewoman Jaffer.  She spoke of the Committee's recent accomplishments including holding the fiscal line while still providing great services to residents. She highlighted the preservation of substantial parcels of open space. "I believe that the continued acquisition of Montgomery's open space is one of the most significant ways in which Montgomery can control its future and maintain the bucolic character of the town," she said.

Ms. Graham served as liaison to the Montgomery Veteran's Memorial Committee last year and listed their many informative and educational public events in 2017.

"The Veterans Memorial Committee, working with many volunteers, organized several important veterans' events last year -- including our first Township Memorial Day Ceremony in Montgomery Veterans Park, our Veteran's day ceremony, with the addition this year of an educational component and historical reenactors, a special memorial dedication for Lt. Ashley Henderson Huff, and Montgomery's designation as a Purple Heart Township."

Newest Committee member Sadaf Jaffer expressed enthusiasm for her first year as an elected official.
"As a Township committee member, I will aim to serve all community members with honesty and openness. I will strive to champion diverse perspectives, civic engagement, and environmental stewardship," she promised.